The original article is written in Spanish and can be found here: https://www.nhl.com/es/news/pepe-sandoval-ilumina-con-su-energia-a-la-organizacion-del-wenatchee-wild/c-319795404

(Below, the article is translated into English.)

Pepe Sandoval: From Zacatecas to the world

Pepe Sandoval arrived in Stockton, California in 1998 seeking the American dream, without being able to complete his medical studies in Zacatecas, Mexico. No one would have thought that 22 years later, this soccer and baseball lover would adopt hockey as a lifestyle, learn to skate, and even become certified as a coach.

But regardless of his vast knowledge of the sport, it has been his way of being, his energy and his positive way of seeing the world, which has made him a fundamental part of the youth, and youth teams of the Wenatchee Wild team within all his facets as assistant coach, equipment manager, or physical trainer.

This is how Sandoval has become a respected and revered figure in this small city of just over 30,000 inhabitants, where the level of hockey is quite high. Above all, if we consider that their semi-professional team in the British Columbia Junior League has served as a springboard for some players towards the NHL Draft and has been the home of the children of outstanding professional players.

For example, Nelson Emerson, who amassed 488 points in 12 NHL seasons, now supports the careers of his 19-year-old twins, Quinn and Blake on this Northwest team. Thanks to the grateful comments of his sons, Emerson has become an admirer of the Pepe Sandoval story.

“As parents we send our children to these cities and we have seen that the community treats them as if they were home,” said the current Director of Player Personnel of the LA Kings. “And that’s how we met Pepe, who has dedicated himself to this for the love of sport, and helps shape young people not only as players, but as people.”

Emerson knows first-hand what it means to be a young man who comes with hopes of turning professional, in a new city with little experience in life. This is the importance of what Sandoval does to help create a good environment for them.

“Pepe treats the guys very well and makes them feel great,” Emerson said. “Sometimes out of nowhere, he takes them to lunch or dinner and that excites them a lot. It makes them feel very comfortable.”

Pepe Sandoval had to leave his medical studies in Mexico due to lack of financial resources and chose to pursue a new life in the United States in the late nineties. His first job came as a day laborer in the cherry crops that began in California and spread north into Washington state.

Wanting to excel, Pepe learned English and developed in different trades until finally settling in Wenatchee, Washington as manager of an apartment complex. With the arrival of a new hockey team in town, fate would bring him a new love and a new career opportunity.

“When the team came to Wenatchee in 2008, the coach was looking for an apartment, and he invited me to a game,” Pepe recalled excitedly. “The team lost ugly, but I liked the sport.” 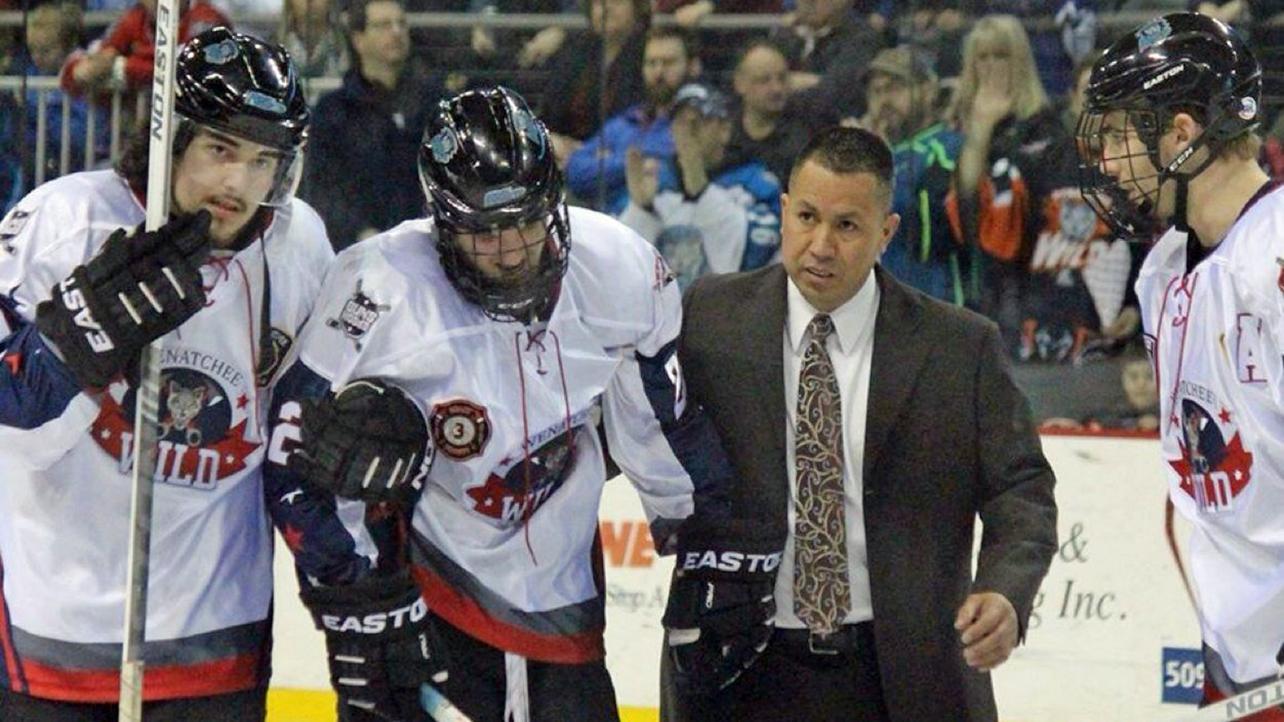 Such was the impact that hockey caused on Pepe due to its physical nature and the atmosphere of the games, that Sandoval volunteered his services in first aid, based on the knowledge acquired during his medical studies in Mexico. The team assigned him as a physical trainer and two years later he would be offered the opportunity to join as an assistant coach in the newly emerged U-18 category.

“How am I going to be a coach if I don’t even know how to skate?” Pepe asked the coach after the offer, receiving as an answer,  “Don’t worry, we’ll teach you.”

Without much time to waste, Sandoval started skating at 33 (which he acknowledges was very difficult), learned training drills, and eventually earned his Level 4 Coaching Certificate from the US Hockey Federation.

And so they have continued for 10 years where Pepe has dedicated himself to lighting the path of all the players and members of the organization with whom he has been able to interact.

“I’ve always been very sociable with any people, even a stranger, I always like to talk, smile,” said Sandoval. “Life is too short to be sad.”

The Wenatchee Wild recently saw two of their own selected in the 2018 NHL Draft: Slava Demin and Jasper Weatherby, chosen by the Vegas Golden Knights and the San Jose Sharks, respectively. These young people will always cherish Pepe for his experiences as junior hockey players.

“Pepe is maybe the least selfish person I’ve ever met,” said Demin, who now belongs to the Chicago Blackhawks. “Every day he would come in with a huge smile and he always did more than necessary to help the boys.”

And in addition to the smile, Sandoval knows how to make himself known with his energy during games whenever the Wild needs an emotional boost.

“Pepe likes to coach from time to time, telling us that we are not working hard enough,” said Leigh Mendelson, Wild’s Associate Head Coach. “He’s like an older brother or an extra father. He makes us better.”

As hockey grows with the Latino community in the United States and in Latin America, Pepe is ready to continue this incredible adventure and serve as an ambassador for the sport at every level possible.

“I already have my whole family watching hockey, from the youngest to my parents,” Sandoval said excitedly. “It is a beautiful time in my life and I am proud to represent my culture.”